LISTEN TO THE PODCAST ONLINE ** Virginia Beach, VA – December 7, 2019:  Chris Anderson’s humorous song, “Just Change The Boundary (The Gerrymander Song)”, is included in an upcoming broadcast of the Virginia Humanities nationally syndicated radio program “With Good Reason,” featuring executive producer and host, Sarah McConnell . The show will air on public radio stations beginning on December 13, 2019. Songwriter E. Christine (Chris) Anderson (BMI) sings and plays guitar on the recording, which also includes performances on piano, bass and drums by producer Dave Mallen with Seth Kibel on saxophone.  In 2018, Chris Anderson won Gold in the Mid-Atlantic Song Contest (Open Category) for the song about gerrymandering. “Just Change The Boundary,” can also be heard in the documentary “GerryRIGGED, Turning Democracy on Its Head.” IN 2004 Anderson won a GRAMMY in THE STREETS  from BMI & the National Academy of Recording Arts & Sciences for a song from her 2003 Christmas project, ”WAiT -It’s a Musical!” * For information on Chris Anderson, contact Chris Anderson . * For the listening schedule of the “Gerry-Rigged” episode visit “With Good Reason.” * For general information on the radio progrm contact “With Good Reason” contact : # # # Chris Anderson & The Harried Americans awarded commission…

Virginia Beach, VA – October 13, 2019: The Virginia band, The Harried Americans, was selected for a commission to develop a musical as part last weekends’s Proteus Festival sponsored by Zeiders American Dream Theater (The Z) in Virginia Beach. The Z’s annual Proteus Festival is a multi-day celebration of creative experiences. The Proteus artists presented over forty performances in six days, and fostered the creation of a dozen new works. ??The Harried Americans perform regularly in the Washington, D.C. metro area. The Harried Americans are singer/songwriter Chris Anderson on guitar and harmonica, drummer and emcee Ron Goad, keyboard and guitarist Mark Johnson and bassist Niels Jonker. This will be their first writing project as a collaboration. The next Harried Americans RoadShow is on Friday, October 25 at 7:00 pm at Cafe Montmartre in Reston, VA. The show also includes featured artist Canadian singer/songwriter Shawna Caspi, comedian Patty Bailey and beat poet Rod Deacey. Tickets are $15, and are available online at the Harried Americans website or through Brown Paper Tickets. Chris Anderson, won a GRAMMY in THE STREETS from BMI & the National Academy of Recording Arts & Sciences for a song from her 2003 Christmas project, ”WAiT -IT’s a Musical!” Her song about gerrymandering, “Just Change The Boundary,” can be heard in the documentary “GerryRIGGED, Turning Democracy on Its Head,” and won GOLD in the 2018 Mid-Atlantic Song Contest. Ron Goad has served on the boards of several nonprofits and has been awarded seven WAMMIEs by the Washington Area Music Association (WAMA) for “Most Supportive of Washington Music.” Bassist Niels Jonker has shared the stage with artists like Bryan Bowers and Tony Trishka, playing from the U.K. To California. He is also a student at Berklee College of Music.?? Mark Johnson has been immersed in music since 1972. He plays keyboards, guitar, bass and loves to explore new musical instruments and styles. He is most often found supporting other musicians and collaborated with the Mantua Finials in developing the “Legend of the Bunnyman,” a 3-CD musical story centered on a local urban legend. * For information on The Harried Americans, visit their website. * Link to Zeiders American Dream Theater.

I am happy to announce that I will be performing on Friday, June 28, 2019 at the Women’s Summit for Political Engagement at Tyson’s Corner, VA. Tickets for this 3 day event are available now. Last year the Women’s Summit sold out early. Don’t miss out.

Hunter at Sunrise (WHRO, Norfolk, VA) – Sunday, October 14, 2018 – A live performance and interview by the superbly nice Hunter Hughes on the “Hunter At Sunrise” radio show, an acoustic and eclectic radio show. It streams at whrv.org LIVE every Sunday morning from 7-11am Eastern. It also streams at i-Tunes, Shoutcast, and Radiotime. If you have a digital radio you can find them at 89.5 WHRV HD- 2 AltRadio. The shows are also available On Demand at the Hunter At Sunrise website.   Thank you, Hunter Hughes! 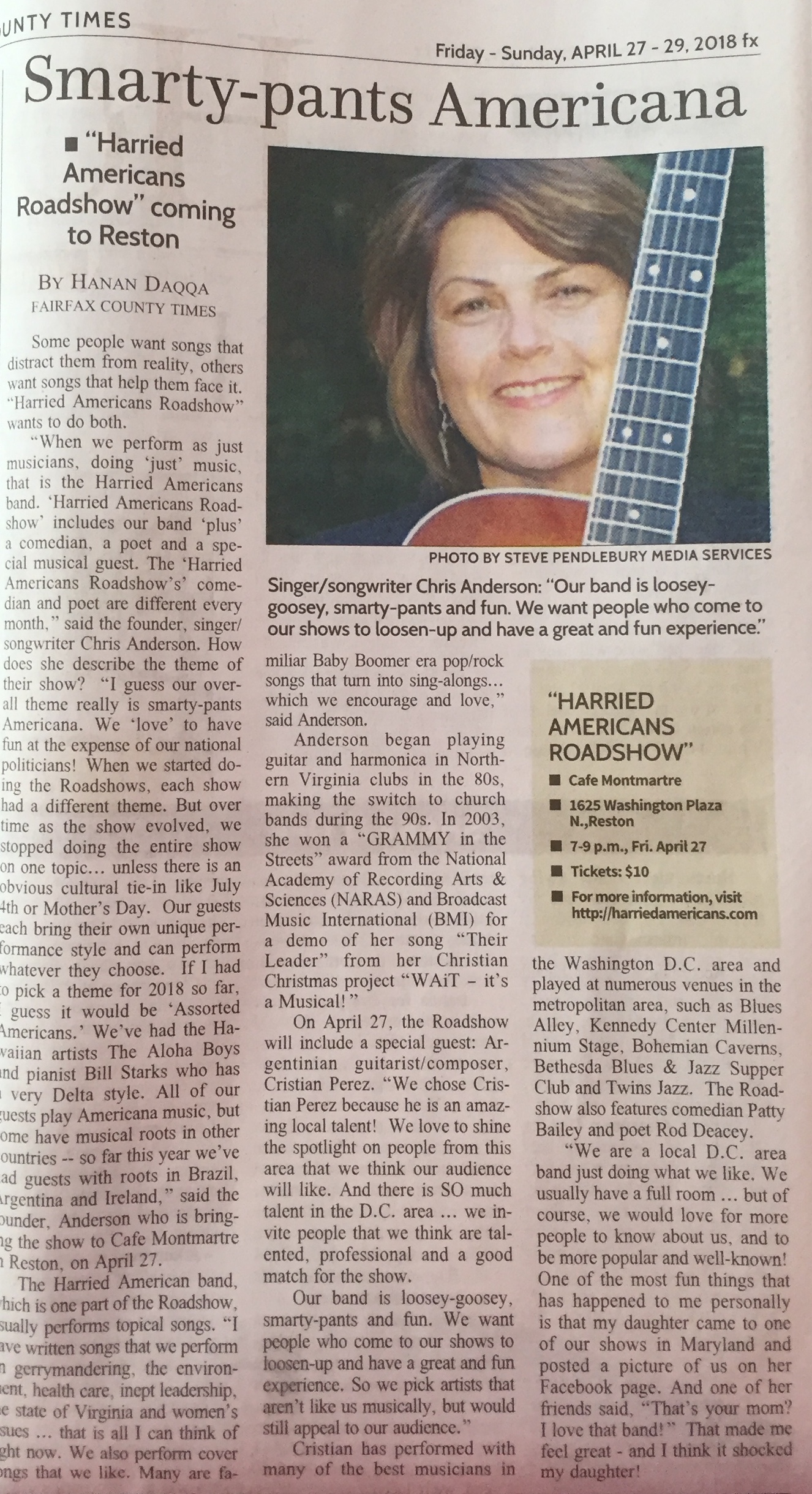